It starts like most Katrina stories. Going to bed on a Saturday night hearing the storm was a Category 3. Waking up to frantic phone calls at 5am on Sunday with the the worst news – it’s now a Cat 5 – we all need to get out of town.

Most of the students at Loyola had already evacuated. Most students were from out of state and so the first mention of a hurricane saw them heading home. But we still had students to evacuate. Had offices to try and prepare for the worst. So my husband and I pack a week’s worth of clothing, our cat and headed to campus. Students were leaving on buses to Baton Rouge as had previously been planned for in emergency management meetings years ago. My boss, my husband and I went into offices in the Danna Center (Student Union) and started taking cords out of sockets. Putting computer CPUs on desks in case of flooding. After most of this was done, and we felt there wasn’t much more we could do – we talked about our plans.

Joe and I were headed to my brother’s in Nashville, TN. My boss was headed to Baton Rouge. Joe said, “See you in a week.” and both my boss and I looked at him and said, “It might be a lot longer than that.”

We had been trained from day one that NOLA is a bowl. If and when a major hurricane came in – the bowl would fill up and devastation would follow. We headed to Nashville. The trip took longer than it should have, but considering the number of folks trying to get out of the city, it could have been much much worse. We saw National Guard going in the opposite direction of us and we cheered for them.

When we arrived at my brother’s apartment he had limited cable, no internet and so we were forced into buying newspapers (!) and watching the nightly news to see what was going on. I know! Imagine that. At first, it sounded like Mississippi got the brunt of the storm and by the time Katrina blew in to NOLA – it was downgraded to a Cat 3. So it didn’t sound like there was too much damage. But then word came that the levees broke, and we knew it was bad. We made arrangements to head up even further north to stay with my grandmother in Kentucky.

Surreal. I will never forget how surreal it is to watch something like this happen to your town while you are hundreds of miles away just watching on tv. Seeing your Walmart get looted. Wondering just how much looting was going on. Were people breaking into our apartment? (Jumping ahead – No.) Watching the suffering of the people at the convention center. Knowing just how hot it must be without power for any kind of air conditioning/fans. Feeling so much guilt for having been able to get out of the city, for having the means to do so. Having somewhere to go for free.

Grandma had dial up internet. It was better than nothing. We immediately started connecting to Facebook to find each other. Remember – this was early Facebook. 2006. But it’s how we found students, staff and friends because so many of us couldn’t get our cell phones to work. (Although after the fact we’d talk about how we could sometimes get texts through). We talked about watching the Concert for Katrina that would be on put together by Harry Connick Jr. and others. Saw Kanye say that George Bush didn’t care about black people.

After about a week, my husband got a phone call from his company – Cummins MidSouth Diesel. They offered to put us up outside of Birmingham, Alabama in a townhouse style place – put Joe to work – and pay him for the week of work he missed. So we headed to Alabama after doing our week’s worth of laundry at Grandma’s and stayed in a hotel for a week until an apartment could be secured. Joe worked and I tried to figure out what needed to be done next. We couldn’t get in the city anyway – so we were there for the long haul as long as we knew. There were other New Orleanians in the hotel and we’d watch the news and try to figure out what was going on. Mayor Nagin went OFF on the radio which we loved and General Russel Honore came in and took charge.

We then moved to the apartment. This is one of those funny stories that wasn’t funny at all at the time.

When family heard what had happened to us – they of course wanted to help. We got many many gift cards and needed them desperately. We had shelter – yes – but the bed had no sheets. We had no towels, no toiletries, no food. Silly things like condiments etc we didn’t have. The shower had no curtain. Small things like that. It felt strange buying all these things when we didn’t know how long we would be living there so the help from family meant the world to us. So – I go to Target – with two carts full of stuff and start to try and pay for things using like five different cards. At one point it was getting confused and I just broke down crying. I had to explain what was going on because I’m sure that cashier was like, “WTH?”.  She actually felt so bad and gave us her employee discount which was amazing. Kinda funny now, but at the time not so much.

We stayed outside of Birmingham for one month. Loyola let all employees know that they were still going to pay us. Bless you. I will always have a special place in my heart for the Jesuits. Men and Women for Others.  Then we were told that they’d like us to head back to Louisiana and we’d be staying in Patterson, which is way south of New Orleans and Joe would have to drive into NOLA everyday. (About an hour and a half drive each way). So we headed back down south. Took all of our new stuff with us and set up shop in a rental house.

Back in the City

So around two months after we left New Orleans, we were back in the area and we were able to get in the city. This is what we found. The roof had blow off of the house we lived in. All of the insulation fell on top of everything and the open air and second hurricane had free range over two months. I’ve never shared these pictures before. 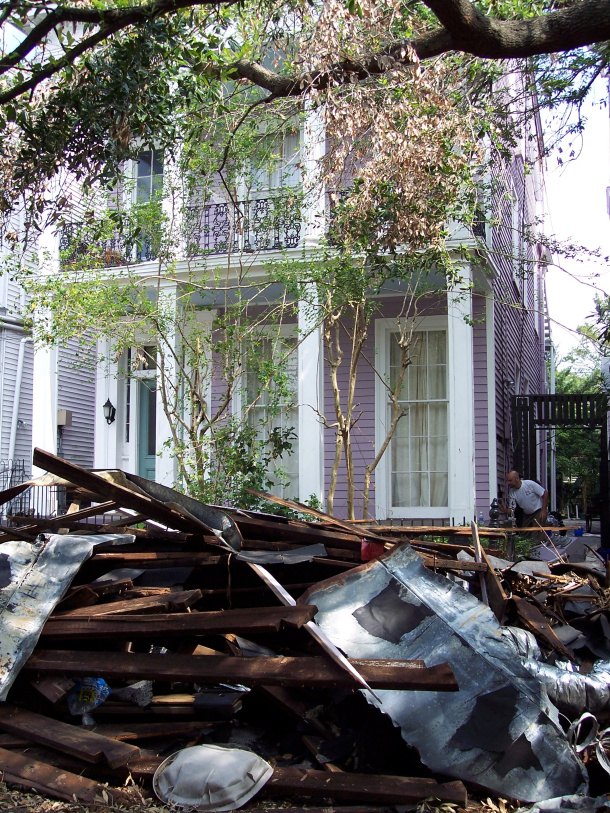 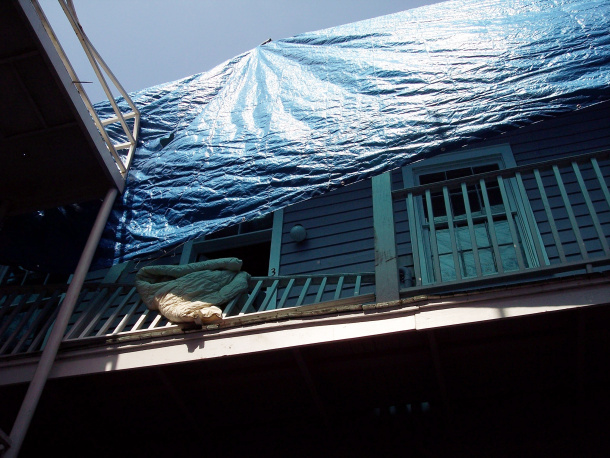 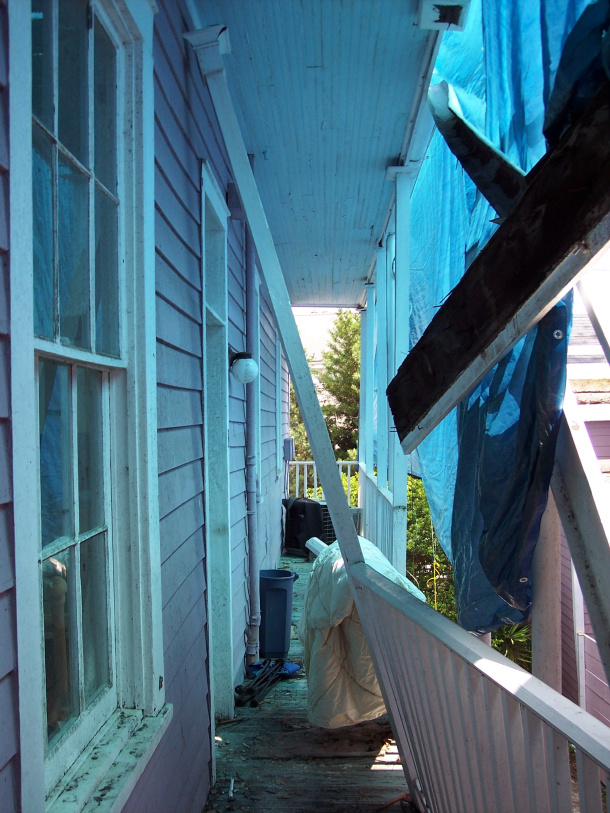 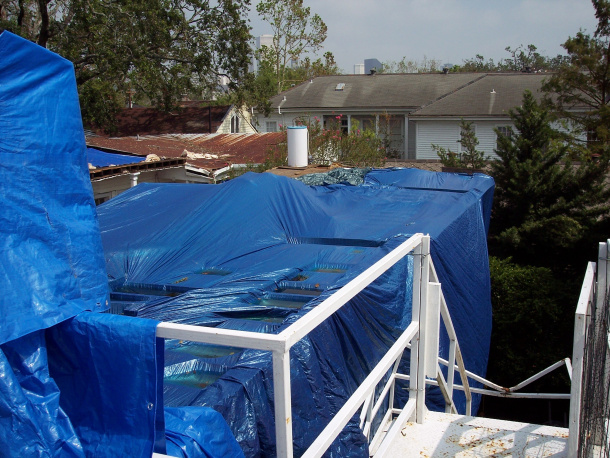 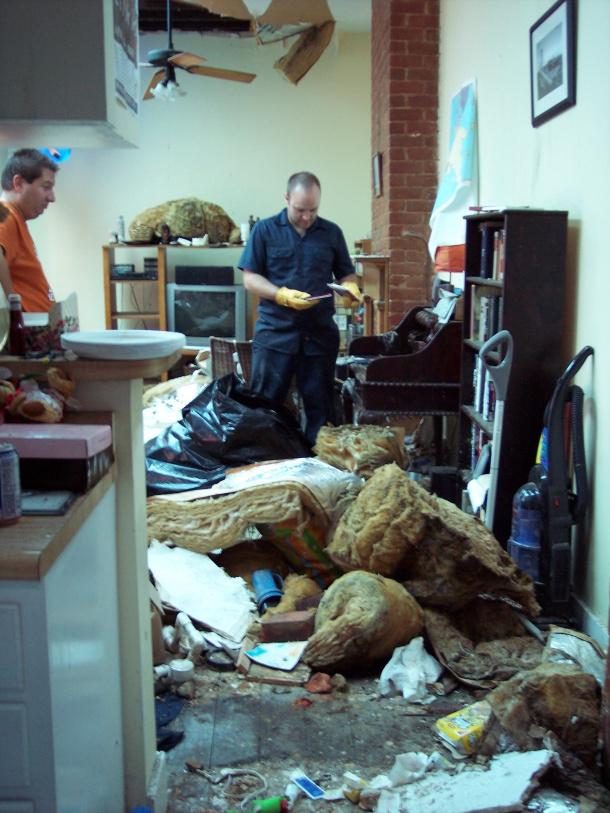 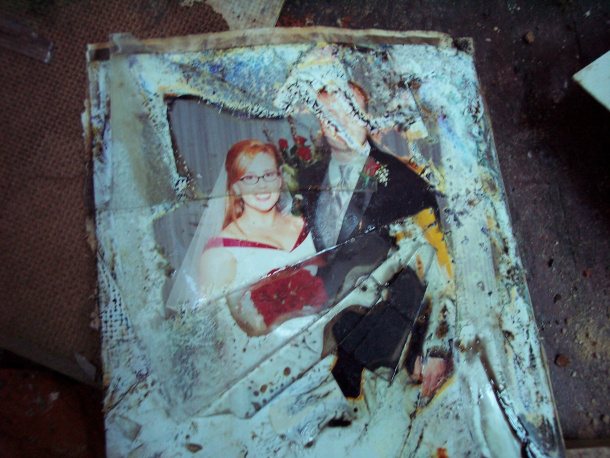 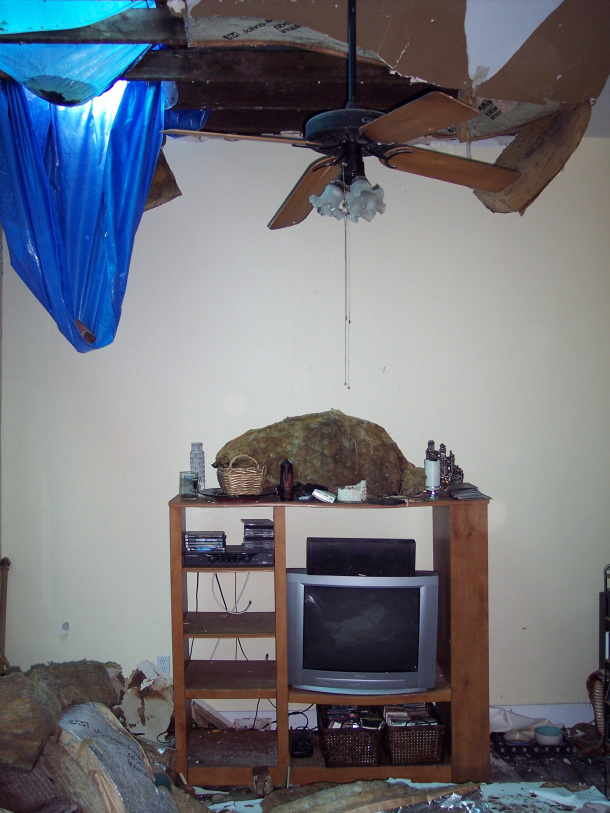 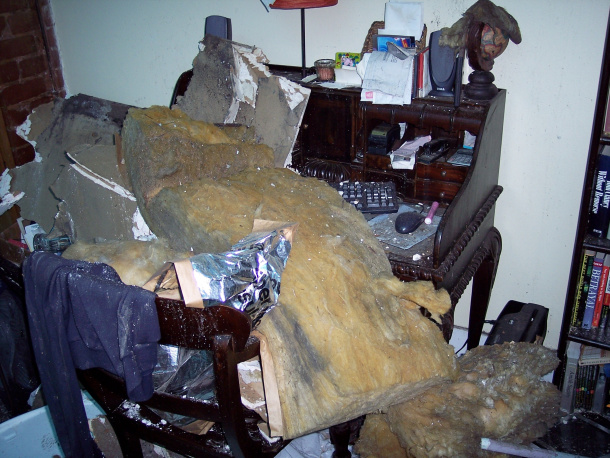 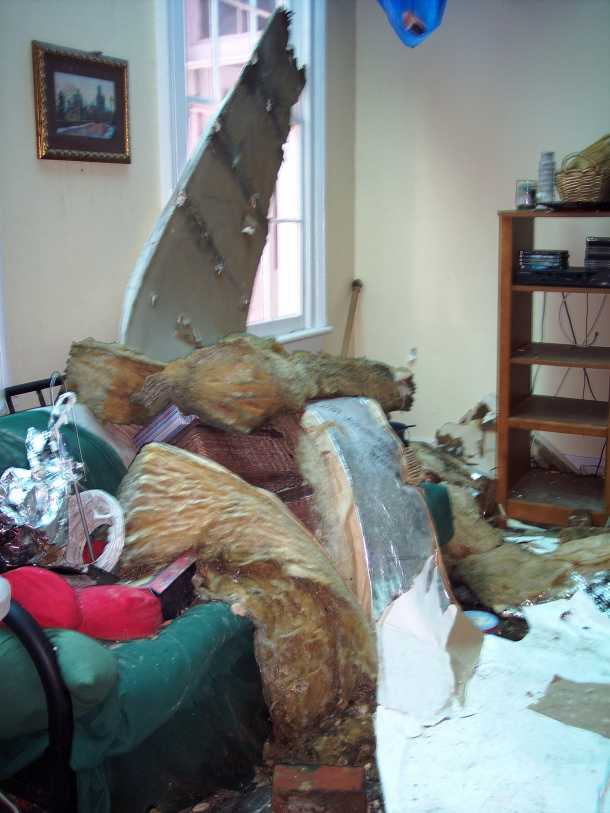 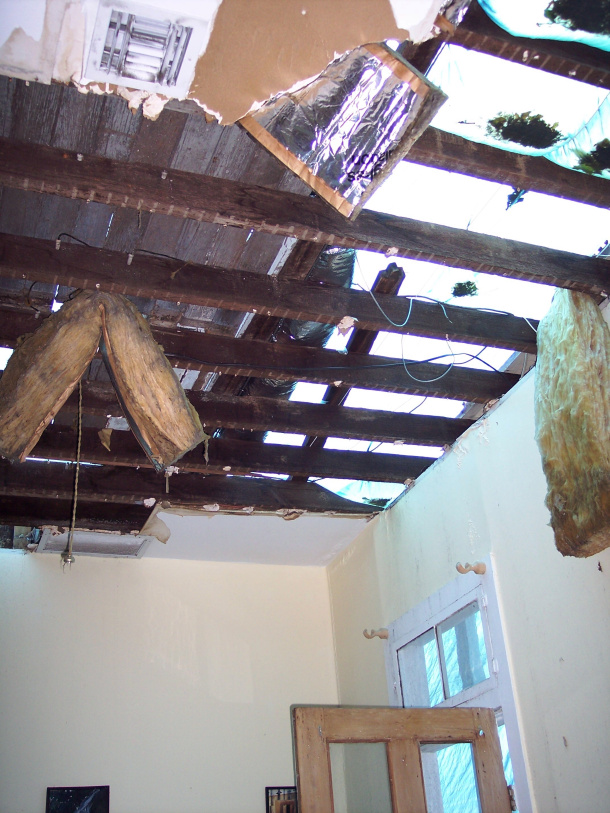 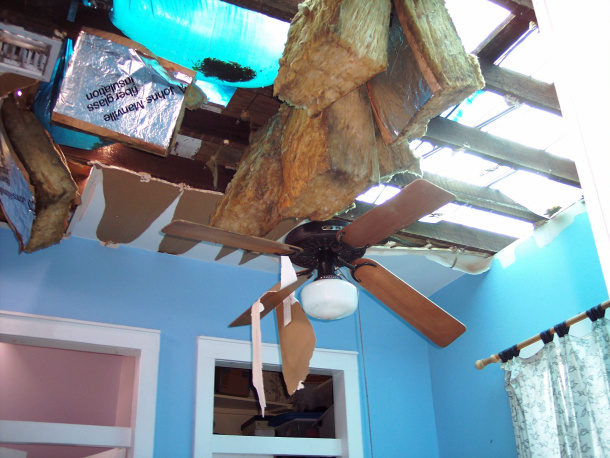 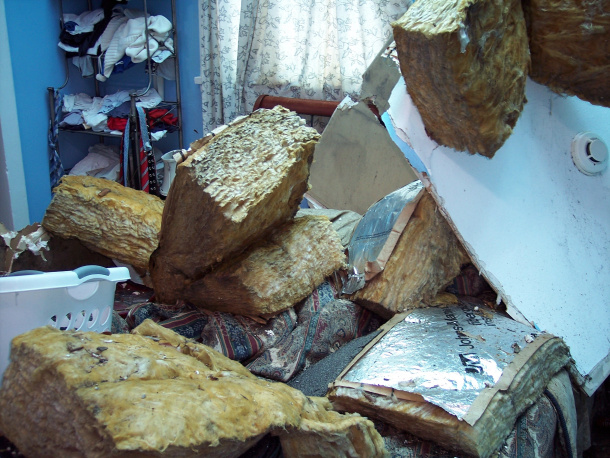 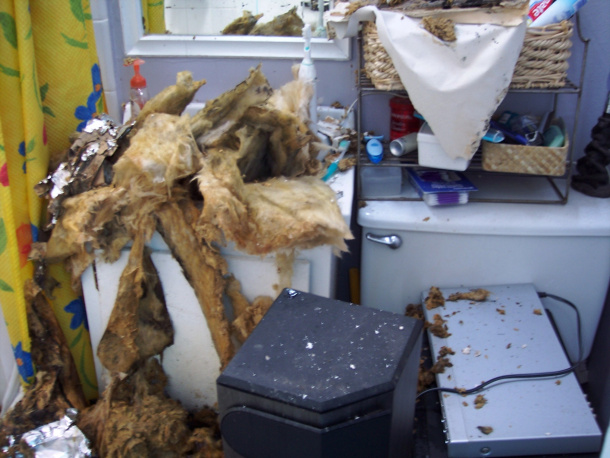 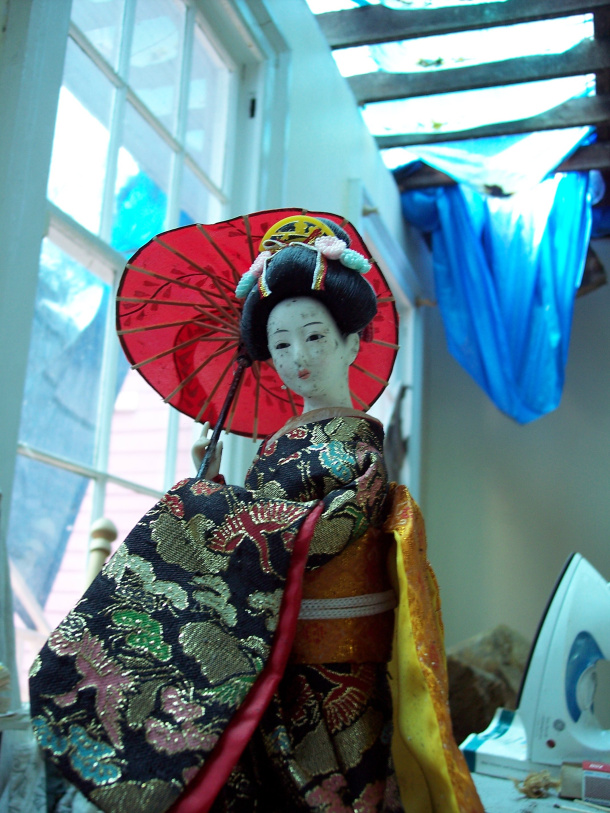 So the good thing was we had renter’s insurance. There was true hurricane wind damage. Most folks with Katrina stories will talk of flooding which by far is worse. However, many many people dealt with just regular wind and rain damage. This from a mere Category 3.

My full time job became documenting and filling out insurance claims. I had spent 8 hours in Birmingham getting a FEMA check, and we were able to use that for some cost of living items. We were covered for about half of what we owned.

Here’s a big shout out – again Cummins MidSouth stepped up and helped us out. We were able to apply for and received funds that covered the other half of what we lost. This money came from donations from Cummins employees. People we don’t even know and never will. I cannot stress enough how much this company did for us and how we will always be appreciative and grateful.

We cleaned out what we could. Our landlady let us have our deposit back. She offered it and we didn’t expect it. She said, “Take what you can salvage, leave the rest – I’m having the whole place scrapped/cleaned etc.” We were able to take our things and walk away.

We found another apartment, but it wasn’t easy. Rent hikes were insane. But we were in an apartment (without much furniture) by November. Pretty amazing stuff.

Loyola had a day in October where students could come in and get their things. They had only just moved in when the hurricane came and the University was closed for the rest of the Fall semester. So I went to campus along with my boss and the Director of Residence Life and we did the grossest job. We had to check out the microfridges. Students moved in and immediately stored their milk, their orange juice – things that sat in confined heat for three months. The taping up of fridges and putting them on the sidewalk became a big thing.

We even found a dead squirrel.

The Director of Residence Life actually lost more than anyone else on staff. His house flooded to the roof. Knowing what he went through, what he lost, and seeing him come to work and plow through things inspired me everyday. I mean it kept me in line, kept me in the right perspective. His perseverance was truly admirable and I will never forget it.

They are so many other things I wish I could describe. The silence in the city when we came back to check out our apartment. Truly eerie. The times when you’d be fine one minute and then crying the next. The whole story of leaving. That’s the hardest.

Biggest tip I have now for people who want to help those who have been through a fire, a flood, most natural disasters…offer to do their laundry. Wash their clothes twice and dry them them with fabric sheets. One wash might not do it and this is expensive when trying to use quarters at a Laundromat.

p.s. The weekend we moved to Binghamton and moved away from NOLA – there was the first of the 100 year floods…and yes someone blamed us for bringing it with us. Ouch.

2 thoughts on “10 Years Today -My Hurricane Katrina story with photos.”